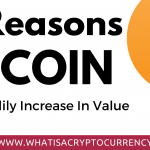 Cryptocurrency is the future, and the future is already here. The following is a list of 19 reasons we see the price of bitcoin tripling or possibly going even higher in the coming mid to long term.

Hopefully, you found this list as informative and eye-opening as we did.  Stay prosperous until then!

P.S. Still confused about Bitcoin, the blockchain, altcoins, and all this cryptocurrency madness?!  Don’t sweat it; we’ve all been there before.

I’ve put together just the thing for you.  A FREE Crypto Mini-Course that in several short and easy to follow videos will explain how it all works and how average people like you or me can get involved without having to break the bank…

Please SHARE this ‘What Is A Bitcoin And How Do You Use It?’ report with your favorite social media networks!