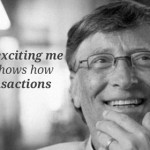 Does Bill Gates like Bitcoin? I don’t know about you, but if Bill Gates is going to come out supporting something in the world of technology & money, I’m going to be paying serious attention.

America’s richest man threw his weight behind cryptocurrency and digital currency in general during the Sibos 2014 financial-services industry conference in Boston.  He sees the low cost to no cost payments solution as the way of the future.

Much like how when cell phones first came out, not many people used them or knew about them.  And ten years later, they became a regular part of everyday life, and everyone has one.  Cryptocurrency will be much the same.  In 5-10 years, we will all be using digital currency!  Our society has already transitioned to a virtually cashless society anyways through the use of credit and debit cards. 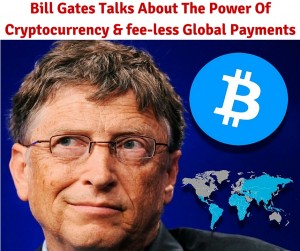 At the event, Bill spoke in favor of cryptocurrency as a payment solution.  Because Bitcoin & cryptocurrency make it easy to move any amount of money from party to party, from any two points on the planet (with internet / mobile phone access, of course!)

“Bitcoin is exciting because it shows how cheap it can be,” Bill Gates said to Erik Schatzker during an interview with Bloomberg TV’s Smart Street show.  “Bitcoin is better than currency in that you don’t have to be physically in the same place and, of course, for large transactions, currency can get pretty inconvenient.”

When Gates delivered his closing keynote address, he reiterated his perspective that in the future, financial transactions would eventually “be digital, universal, and almost free.”

Bill Gates believes that there are a couple of improvements that need to happen with Bitcoin and cryptocurrency.  His main qualm is that the technology needs to be modified or evolved in a couple of ways.  The first most important advancement is to bring attribution to transactions so that cryptocurrency can’t be used for nefarious purposes.  Secondly, the speed of moving money needs to be increased from 10-30 minutes to real-time instant speed.

If Bill Gates is backing cryptocurrency as a digital payment solution, you know where the future is with money!  He was kind of right with Microsoft Windows [editor note from the future: but horribly wrong about vaccines!]  He’s going to could be partially right about the future of money, Bill Gates is America’s richest man for a reason, but no man can predict the future. But you can hedge your bets on this!

I hope you enjoyed this bit of Bill Gates Bitcoin news.  I look forward to providing you with more info and education from the world of cryptocurrency!  It is my mission to educate as many people as possible, because learning about what is happening here in time to capitalize on it, has the power to be life-changing!

P.S. Want to learn how you can profit from the cryptocurrency revolution? Check out our FREE Cryptocurrency Mini-Course, just click the link below: