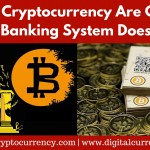 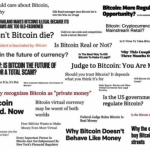 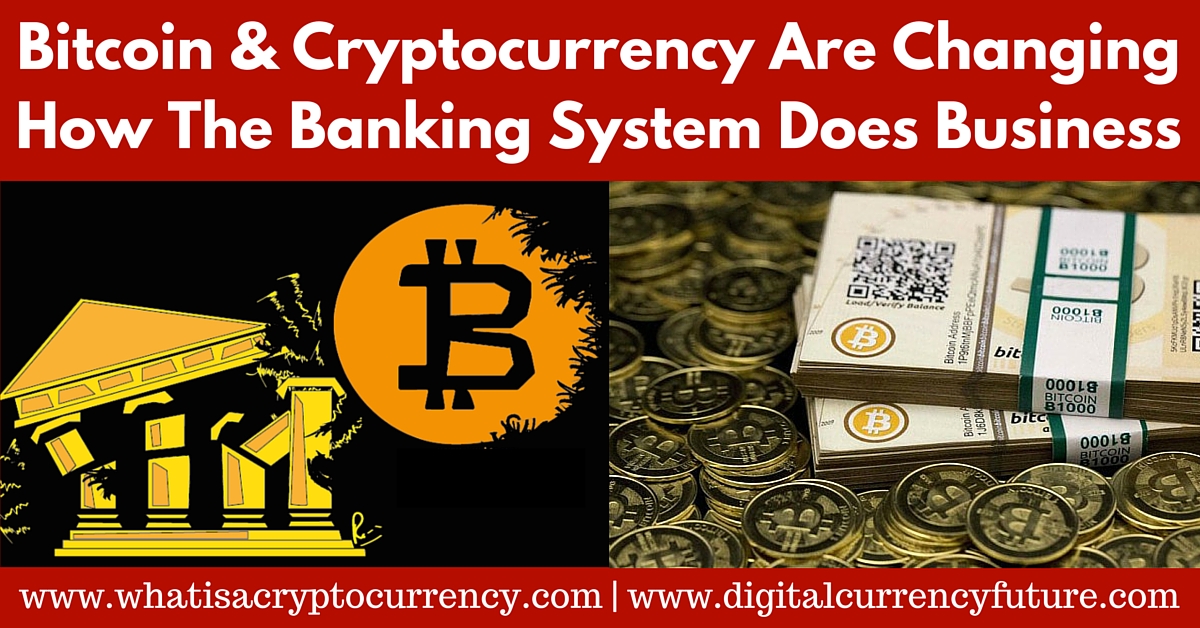 Bitcoin and the underlying blockchain technology behind cryptocurrency is changing the way the banking system does business!  You can see evidence of this in different areas, the bankers and governments have changed their tune over the currency and technology, and are now implementing it as we speak.

The research presented in the following article was conducted by Sander Duivestein, a professional speaker and trendwatcher at the International Research Institute of Sogeti (VINT).

Last weekend JPMorgan Chase & Co., the largest bank in the United States, published a job opportunity for an associate at its New York branch. One of the requirements was an “opinion on bitcoin and other cryptocurrencies.” The bank has since deleted the remark, but the Wall Street Journal managed to write about it before JPMorgan could remove it.

The cover-up marks a radical change in how banks now see the enfant terrible of currencies. JPMorgan’s CEO Jamie Dimon dismissed Bitcoin as a “terrible store of value. It could be replicated over and over. It doesn’t have the standing of a government. […] And honestly, a lot of it — what I’ve read from you guys — a lot of it is being used for illicit purposes.”

Through the Trough of Disillusionment: from evil to good

But Dimon was not alone in his crusade against Bitcoin. Other giants from the financial world shared his opinion. Alan Greenspan, the former president of the Federal Reserve, was baffled by the digital currency: “You have to really stretch your imagination to infer what the intrinsic value of Bitcoin is. I haven’t been able to do it. Maybe somebody else can.”

According to Benjamin Lawsky, superintendent of New York’s Department of Financial Services, the cryptocurrency created “a virtual Wild West for narco-traffickers and other criminals.” Even Nobel Prize-winning Op-Ed columnist Paul Krugman asked himself in one of his weekly columns for the New York Times if Bitcoin isn’t just “evil. ” 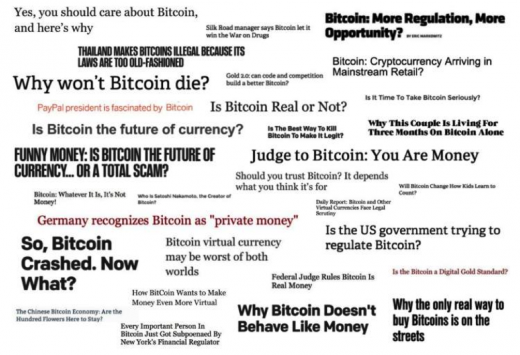 People just didn’t understand Bitcoin and Cryptocurrency at first. They thought it was evil!

Nowadays, the financial world is reconsidering their opinion about Bitcoin. At the beginning of September 2014, the Bank of England published a report that describes the blockchain — the distributed ledger of Bitcoin — as a “significant innovation’ that has ‘far-reaching implications.”

In February 2015, the Bank refined their opinion: “Creating such a system would entail creating a protocol for value transfer over the internet, akin to what Berners-Lee (1989) did for information.” It all reflects the thoughts of Oliver Bussmann, group chief information officer of Swiss bank UBS.

In an interview with Wall Street Journal, he said: “I believe — and this is my personal view — that blockchain technology will not only change the way we do payments but it will change the whole trading and settlement topic.”

Bussman believes that blockchain technology has the potential to trigger a “massive” simplification of banking processes and cost structure. He added: “When somebody with a strong brand and security level establishes it as a reliable service, then the whole industry will follow. That is my personal prediction.”

And they have gone from demonizing what they didn’t understand (bitcoin) to embracing it!

Banks Are Getting Undressed For Cryptocurrency 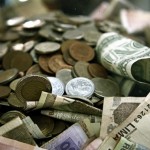 The totality of bank service offerings are being replaced by the growing FinTech companies of the world. Or ‘unbundled’ as the VC’s from Silicon Valley like to say. Parts of the bank are turned into stand-alone products that are delivered to the consumer at a scale and cost that no traditional bank can match.

This unbundling happens on two fronts. Top-down, there are FinTech companies that piggyback on the traditional payments and transaction solutions for fiat currencies. On top of these networks, they focus on “enhancing customer experience, increasing convenience, and streamlining the process of using bank and card payment networks.”

The downside of this development is that banks lose their ability to manage customer experiences by themselves. Banks are moving to the bottom of the value chain.

Bottom-up FinTechs meanwhile are threatening the market from a cryptocurrencies-point of view. They not only bring finance and technology together but also reinvent the entire financial system.

It’s an entirely new network protocol that allows value to be exchanged without the need of a trusted intermediary. In this scenario, banks hardly play a significant role anymore.

Cryptocurrency and the blockchain technology have the power to replace the entire banking system as we know it!

All kinds of applications are now built on top of the Bitcoin blockchain. Smartphone apps that will make the underlying complexity invisible to the end-users.

Soon transferring money and property will be as easy as swiping your finger from left to right. It’s beyond having information at your fingertips; it’s exchanging value on steroids (without the need of a trusted party).

A Napster moment for finance

Banks are now anxious that they are facing their own Napster moment – the point when the rise of a new platform disseminates an entire industry by offering a simplified experience in a cheaper way and at a scale that makes it impossible to compete.

Just remember how Napster and its descendants — like Spotify and Netflix — have changed the entertainment industry in only a few years. The media industry just let it happen. Incapable of improving their DNA and culture to adjust to these new technologies. They followed the Shirky Principle: “Institutions will try to preserve the problem to which they are the solution.”

It’s not strange that Marc Andreessen — one of the founders of Netscape and nowadays venture capitalist in companies like Facebook, Skype, Twitter, LinkedIn, and Airbnb – recently said:

“We have a chance to rebuild the system. Financial transactions are just numbers; it’s just information. You shouldn’t need 100,000 people and prime Manhattan real estate and giant data centers full of mainframe computers from the 1970s to give you the ability to make an online payment.” 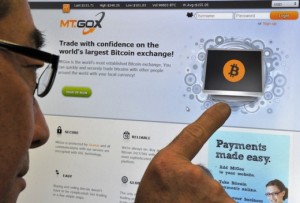 His words started an explosion of FinTech-startups. Recent research shows that global investment in FinTech is set to double from $10 billion in 2014 to $19.7 billion in 2015. By 2020, the total is projected to be $46.1 billion. The FinTech scene is so hot, it’s boiling.

In the first two months of 2015, already $105.84 million has been invested. In The Guardian article’ Bitcoin: will 2015 be a make-or-break year?‘ some other statistics give a broader perspective on the growth and acceptance of bitcoin:

“More bitcoin startups launched than in any year prior (more than 500, compared with around 200 in 2013, according to data from AngelList), and acceptance by major companies continued to spread. (Microsoft, Dell, and Overstock.com all accept bitcoin now; publisher Time Inc accepts it for magazine subscriptions.)” 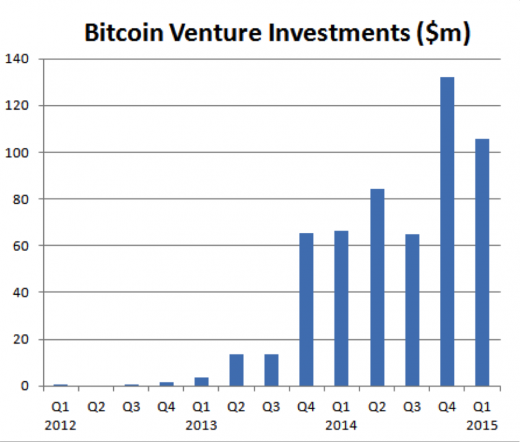 The exponential growth of Bitcoin

In July 2014, advisory firm Gartner added cryptocurrencies for the first time to their hype cycle of emerging technologies. In the report, they positioned the digital currency between the peak of inflated expectations and the trough of disillusionment. In their view, the cryptocurrency needs another 5 to 10 years before it will be accepted. 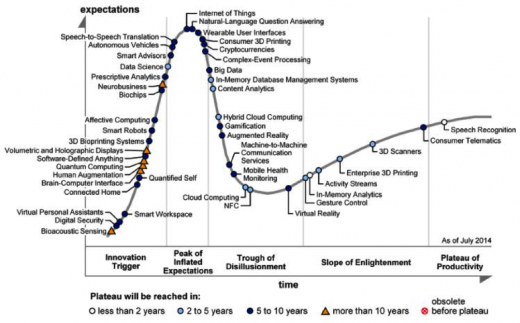 Peter Diamandis, co-founder of the Singularity University and coauthor of the books’ Abundance’ (2013) and the recent ‘Bold’ (2015), doesn’t agree with this timeframe. In his view, Bitcoin’s growth is best explained by an exponential curve, and that’s why it is on a path to become disruptive over the next 1–3 years. 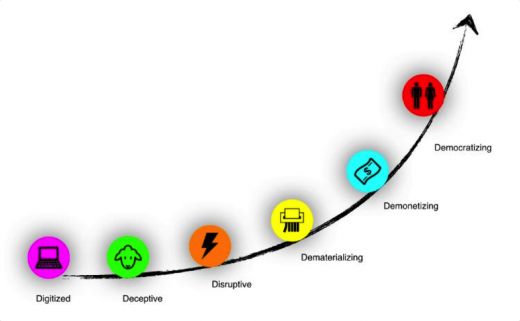 In the beginning, digital technologies follow a linear path before suddenly growing exponentially.  Diamands says that Bitcoin is following his framework of the 6Ds: Digitized, Deceptive, Disruptive, Dematerializing, Demonetizing, and Democratizing.

The cryptocurrency is now on a path from deceptive to disruptive, and it will threaten the entire financial industry as we know it. In the next stages of his model, Bitcoin is eliminating (dematerializing) the use of paper money and even credit cards. Next bitcoin will demonetize the cost of transactions and eliminates the need for middlemen (banks, lawyers, exchanges).

Finally, the last stage will be about banking the unbanked — capital and currency will become available to anyone with a connection to the internet (democratizing).

Banks haven’t changed very much since their invention. Thanks to Bitcoin, they’re now dragged into the 21st century. It’s Digital Darwinism: adapt or die. No wonder that JP Morgan Chase has changed their opinion – and their job postings.

By (quietly) recruiting new employees with knowledge in bitcoin, they are finally accepting the disruptive power of cryptocurrencies.

And you can see that clearly, the future of money lays with the cryptocurrency blockchain.  Bitcoin started it all, and a whole new Trillion-dollar financial industry grew up around it!  The time is now to get involved with cryptocurrency. We are only in the disruptive stage of this technology’s adoption, which is right before it truly changes everything.  With the knowledge you have now, are you going to sit around and be a spectator?

We hope you enjoyed this eye-opening article about the evolution and current state of the cryptocurrency industry!

Special Thanks to TheNextWeb for this article. Please be sure to visit their website  http://www.thenextweb.com.com

Still kind of confused about bitcoin, the blockchain, and cryptocurrency?  Want to learn how you can profit from the cryptocurrency revolution?

Check out our FREE Cryptocurrency Mini-Course, by clicking the following link:

Share this article with your network using the social media sharing buttons below!

0
0
0
0
0
Share with your friends
Submit
← Bitcoin ATMs: A Growing Business Opportunity In Cryptocurrency
What Is A Bitcoin And How Does It Work? [Crypto 101 Series] →